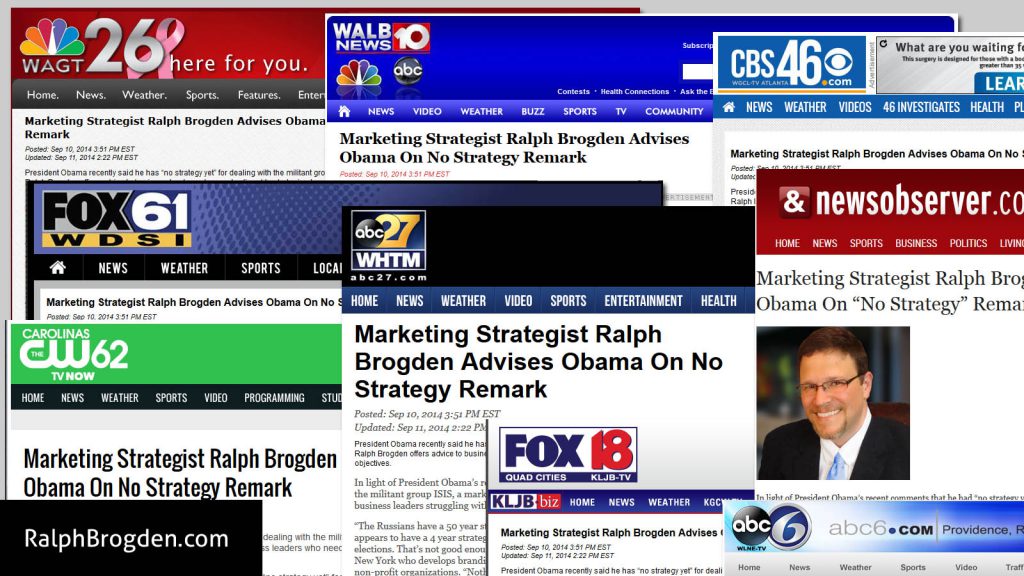 (NEW YORK) In light of President Obama’s recent comments that he had “no strategy yet” for dealing with the militant group ISIS, a marketing strategist offers some sage advice for politicians and business leaders struggling with strategic planning.

“The Russians have a 50 year strategy. The Chinese have a 500 year strategy. The United States appears to have a 4 year strategy – just enough to get through the next round of Presidential elections. That’s not good enough,” says Ralph Brogden, a marketing consultant in Rochester, New York who develops branding, messaging, and positioning strategies for businesses and non-profit organizations. “Nothing happens without a coherent, actionable strategy for achieving your goals.”

According to Brogden, the strategic process is difficult because it forces decision makers to visualize a clear outcome and prioritize their agenda. “A strategic plan is like a budget for your ideas,” Brogden explained. “You can’t do everything all at once. Time, energy, money, and human resources are limited. So your strategy helps you decide the best possible approach to get the best possible result as quickly as possible.”

Brogden says the essence of strategic decision making, in politics or in business, is inherently risky. “Your desired outcome should be relatively unchanging, but the strategy can and should be flexible and adaptable. When one strategy doesn’t work, you need to quickly shift to a new strategy, a new approach, to get what you want. There is no such thing as a perfect, risk-free strategy. The riskiest thing you can do is nothing.”

Facebook founder Mark Zuckerberg echoes Brogden’s thoughts on strategy and risk-taking. “The biggest risk is not taking any risk. In a world that is changing really quickly, the only strategy that is guaranteed to fail is not taking risks,” Zuckerberg said.

As for communicating your strategy to stakeholders? “The worst possible thing you can say you don’t have a strategy yet,” Brogden says. “People expect leaders to be strategic thinkers and to have solutions to problems. I’m sure Mr. Obama has been working hard on this problem, but to publicly say he has no strategy yet gives a different impression.”

How would Brogden advise the President? “Mr. Obama would have been better off to say his strategy is being refined, developed, or finalized,” Brogden says. “For any leader to publicly admit he doesn’t have a strategy is, frankly, quite shocking. The only way to fix it now is to come up with a strategy – fast.”

Yet Brogden concedes that most of the people he works with do not have a strategy either. “They have a mission, vision, goals, or an idea of an outcome they want, but they don’t have a plan for getting there,” Brogden says. “Many leaders are too bogged down with minutia to give thought to strategic thinking. That’s what I help them with.”